In July Volen Siderov, the nationalist far-right leader of the ruling coalition, announced that the main aim of Bulgaria’s presidency of the Council of the European Union will be freeing Russia from imposed sanctions.

Today the confirmation came from Boyko Borissov, announcing during an interview at bTV television that through the duration of the Bulgarian presidency the country will attempt to push forward the so-called Minsk Process, meaning the conflict with the Ukraine will be driven to a conclusion and “we will speak about lifting the sanctions” imposed on Russia. He proclaimed he sorted out the matter with the Greek prime minister Alexis Tsipras and “other colleagues”.

It was only days ago when the chair of the EU Commison, Jean- Claude Junker drafted the future of Europe during his speech and said that Bulgaria has to be admitted in the Schengen zone promptly, while paving the road towards the Eurozone. That leaves one thinking that the main questions that the Prime Minister has to answer will have something to do with the topic.

Furthermore, Bulgaria became viral at the EU capitals, many of which supported or opposed the claim whether Bulgaria is ready to deepen its integration process, mainly taking into consideration the lack of and the controversy surrounding the reform of the Judiciary and border controls.

But none of this was mentioned during the interview between Anton Hekimyan and Borissov. Other matters were eclipsed as well: such would be the visit of the Russian Attorney General Yury Chaika – infamous for his persecutions of Putin’s opponents and also a suspect in the US investigation the Russia meddling in the elections.

Court cases and the nicknacks of the prosecution were broadly discussed instead. These, of course, have nothing to do with the Prime Minister’s duties.

At some point, finally, Borissov was asked about the Report of the Councel of Ministers, a paper admitting about the hybrid warfare led by Russia, which is considered to be a primary threat to the country’s national security. The question was of course asked in the context of whether it will be embarrassing to have the Russian President on March 3 next year (Bulgaria’s Independence day) with such a report hanging in the background.

Leaving the anxieties of our host aside, the important statement made by Prime Minister Borissov is that Bulgaria has a dualistic approach to Russia – on one side we are ready for war with Kremlin, but on the other – we nurture our “pragmatic friendship”.

“This is NATO’s doctrine. In times of future war the Russian missiles would be pointed at Bulgaria”, said Borissov, admitting to have endured criticism from his NATO allies for the fact that he refuses to accept NATO forces in the Black Sea.

“The problem here is that Turkey belongs in the South wing of NATO with us, in the meantime has been in a major conflict with the main NATO allies for many years. So we say “God, please let there be no war”. So this is the reason why I rejected and took a lot of criticism from NATO concerning the fleet in theBlack Sea. I said “OK, land operations – yes, land drills – yes, but if we enter the big military vessels in the Black Sea , if we start moving around in submarines, it will be brought to a boiling point.”

He also added that “In the meantime Russian tourists have expressed great interest in visiting Bulgaria. For two years now President Putin is keeping the promises he gave me.”

“The Balkan Gas Hub – in order for the European gas hub to be powerful, we need Russian gas apart from Azerbaijanian, Romanian or our “Han Asparuh” or “Teres”

“To summarize – while in NATO, we are leading our own strategy and it recognizes it’s threaths, whether it turns into a global, world war on out territory, I mean European.”

“In the meantime we are having a pragmatic friendship with Russia and I just spoke to Tsipras, and others as well, that next year during our EU presidency with God’s help, the Minsk process is to be accelerated a little; we need to talk about lifting the sanctions. But…”

Here Borissov was interrupted by the host as he remembers it’s time for another important topic – “The War on the roads”, because he heard about a yet another victim on the news this morning.

So the interview went back to where a Director of the Ministry of Interior Affairs (on Borissov’s CV) would feel comfortable, but not where a Prime Minister would have any knowledge.

The interview concluded with an extremely important question: what is the name of the dog that appeared on Borissov’s Facebook page? The reply was loud and clear: Bucky. 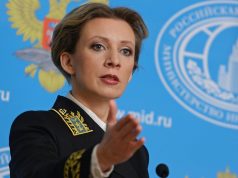 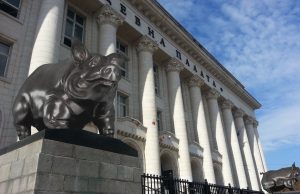